More Tales From the Bible 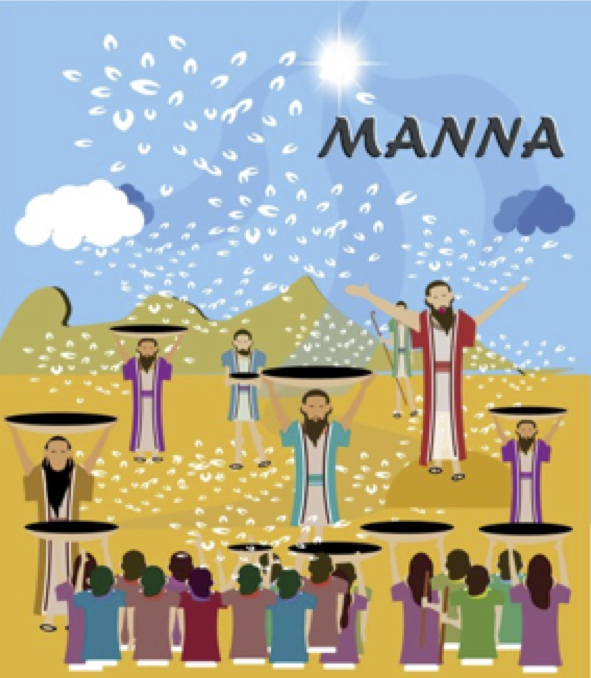 When God Did Takeout

Getting takeout is important in modern life for many reasons.

For single people who don’t know how to cook, it’s a break from peanut butter sandwiches and microwave dinners.

For busy families, it’s a way to put food on the table when life’s problems make it impossible to cook.

For travelers, it’s often the difference between getting food you like and getting a stomach ache.

Rarely is it the difference between life and death though.

But that’s exactly what the Israelites faced when Moses led them out of Egypt… and the Israelites didn’t seem to understand that at all. This story comes from the 16th chapter of Exodus.

It was unbelievable. Moses had marched into Pharoah’s court to demand that God’s people be freed from slavery and allowed to go home… but Pharoah refused. Since that day, the Israelites had seen God do one miracle after another.

And they were horrible miracles:

Because Pharoah refused to obey God, the Israelites saw Him punish the entire country…

All, that is, except for the land of Goshen, which was the part of Egypt where the Israelites lived. Life in Goshen went on pretty much as usual.

Then, when Pharoah finally let the Israelites go free, he sent an army to kill them when they got to the Red Sea. But God dried up the middle of the Red Sea so the Israelites could get across and, when the Egyptians tried to follow them, He drowned them all.

And yet, even after they saw God do all these miracles to protect them, the Israelites still didn’t believe He would take care of them. They griped about how hard their lives were from morning till night, and they claimed they were better off as slaves back in Egypt.

Do you know what was really unbelievable? It was how God continued to put up with all their complaining!

And they thanked Him by complaining more and more.

They had been traveling through the wilderness for about a month when they finally reached the Sin Desert. They had to cross this desert to get to the land God had promised to give them but, unlike the wilderness, desert sand wasn’t a good place for food to grow.

The Israelites complained to Moses again. “Why did you bring us out here where we would starve to death? We were better off as slaves in Egypt. At least we had food to eat there!”

But God told Moses not to worry—He would make sure they had plenty to eat. All they had to do was follow His instructions.

God’s solution was to give the Israelites takeout.

Here’s how it worked:

Every morning, after the dew dried, it left behind flakes that covered everything in the desert. The flakes were a creamy white color like coriander seeds, and they tasted like honey cake. The Israelites called these flakes manna, and all they had to do was go out and gather about a half-gallon container of them. God literally made it rain food!

Again, all they had to do was run out every morning and pick some up.

Well, almost every morning. You see, God wanted them to learn to trust Him and do what He said, so He gave them a couple of rules.

One, don’t keep any manna overnight or it would go bad. He would send fresh manna every morning.

Just two little rules. Those should be easy to obey, shouldn’t they?

Well, you can guess what happened…

Every morning you could smell rotten manna full of maggots because the people tried to keep it overnight in case God didn’t send any the next day.

And on the seventh morning there were people out looking for fresh manna to gather, even though God told them there wouldn’t be any on the seventh day

God said to Moses, “Will My people never learn to trust Me? I will take care of them if they will just obey Me!”

Then He told Moses to take a special container and put one day’s supply of manna in it. Moses put that container full of manna—which God made sure never went bad, by the way—with the holy objects they used in their worship. Eventually, after they built the Ark of the Covenant, they put that container of manna inside. It was a reminder of how the people refused to trust God for their daily needs.

In later years Moses would remind the people of this, telling them “God fed you with manna in the wilderness, a food unknown to your ancestors. He did this to humble you and test you for your own good” (Deut. 8:16 NLT).

But even with all their complaining, God continued to do takeout for the entire 40 years the Israelites spent living in the desert. The manna didn’t stop until they had their first meal in the Promised Land.

Because God always keeps his promises… even when we gripe about it.