The God They Didn't Know 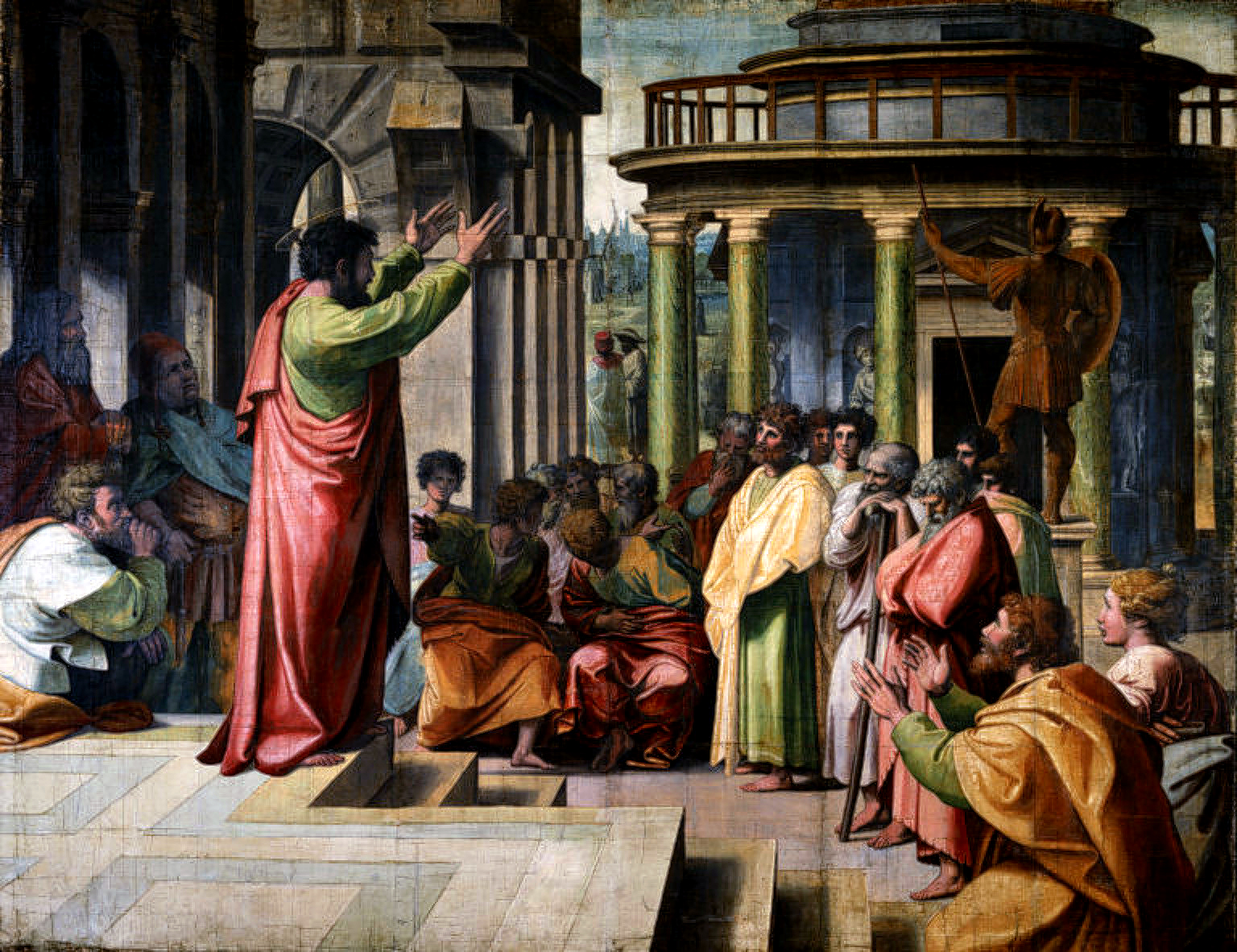 The God They Didn’t Know

In ancient times it could be dangerous to talk about Jesus, and no one knew this more than the Apostle Paul. No matter where he went, there were enemies chasing him, trying to stop him from spreading the Good News. But even in the midst of this persecution, Paul managed to change lives everywhere he went.

Today’s story follows Paul into one of his more famous adventures… and it’s told in Acts 17:1-34.

Things weren’t getting any easier for Paul and his traveling companions Silas and Timothy.  Timothy was a young believer who had joined the two apostles during their stop in his home town of Lystra. Now he was learning how dangerous an apostle’s life could be! The two older men tried to protect their young friend from the worst of it, but it seemed the three were constantly on the run.

When they arrived in Thessalonica, Paul started preaching in the Jewish synagogue there. After his third week there the Jewish leaders got a mob together. They went hunting for Paul and Silas, but the Christians in the city helped the three men escape to Berea.

Once Paul started preaching in Berea, the Jewish leaders in Thessalonica found out. They went there and started trouble again. But since they were mainly after Paul, the Berean believers decided to get him out of town and just hide Silas and Timothy until it was safe for them to join him. They took Paul to the coast and then on to Athens, where they left him and went back to Berea.

While Paul waited for Timothy and Silas in Athens, he spent some time just walking around the city to see what it was like. He could hardly believe what he saw. The city was full of idols to every false god they knew of! So he did what he normally did first in every town he visited—he went to the city’s Jewish synagogue to preach. But he also started preaching in the streets of Athens to anybody who would listen.

And that’s where he met the city’s philosophers. They loved to argue about everything!

This group of men called themselves the Areopagus, which in English mean’s ‘Mars’s Hill.’ Mars’s Hill was a place sacred to the worship of Mars, the god of war, where these men used to meet. But now it also referred to the group, no matter where they got together to talk.

When they heard Paul preaching, they couldn’t agree on whether they believed him or not. So they invited him to come speak to their group about Jesus.

And Paul wasn’t going to turn down an invitation like that!

The sermon he gave to the Mars’s Hill group was different from a normal sermon. He knew he had to give them something different. And that’s just what he did.

He started, “Men of Athens, I can tell you are very religious. As I walked around the city I saw many altars for worship. I even saw one that said it was for ‘An Unknown God.’ You have been worshipping Him without even knowing who He is, so I want to tell you about Him today.”

Well, Paul certainly had their attention then… and they listened.

He told them how God created everything and that He didn’t live in manmade temples, which was a common belief in Athens.

They thought their gods needed people to do things for them, but he told them that God didn’t need anything. Instead, he said, God created everything and everybody all over the world. He decides who controls things.

What God wants, Paul said, is for people everywhere to come to Him and worship Him as He is. And he told them that God isn’t far away from any of us. He even quoted a Greek poet who said, “We are His children.”

That also caught their attention. Paul wasn’t some ignorant preacher. He knew Greek art and culture! They hung on his every word.

Then Paul made his main point. “Since this is true,” he told them, “we shouldn’t think God is some idol made by men from silver or gold or stone. He let some of that silliness slide in the past, but now He is calling all people to forget their idols and worship Him. For now He has let us know that a day is coming when Jesus will judge all of us in truth and fairness.

“And He has proved this is true by raising Jesus from the dead.”

Now, when they heard Paul talk about a dead person coming back to life, some of them laughed while others said they wanted him to come back and talk some more.

After all, talk is what the Mars’s Hill group liked to do.

Paul didn’t go back. He knew he had said all he could.

But a few people there believed him. The Bible mentions a woman named Damaris and a member of the Mars’s Hill group named Dionysius. You might think that Paul’s sermon didn’t have much of an effect on Athens.

But you’d be wrong.

We know from the Greek Orthodox Archdiocese of America, headquartered in New York City, that Dionysius became either the first or second Bishop of the church in Athens. He is known as Saint Dionysios the Areopagite and is considered a saint by several denominations.

Even today he’s known as the patron saint of Athens.

And in Athens, there are two different churches named after him. One is Greek Orthodox, the other Catholic.