The Boy King and the Lost Scroll 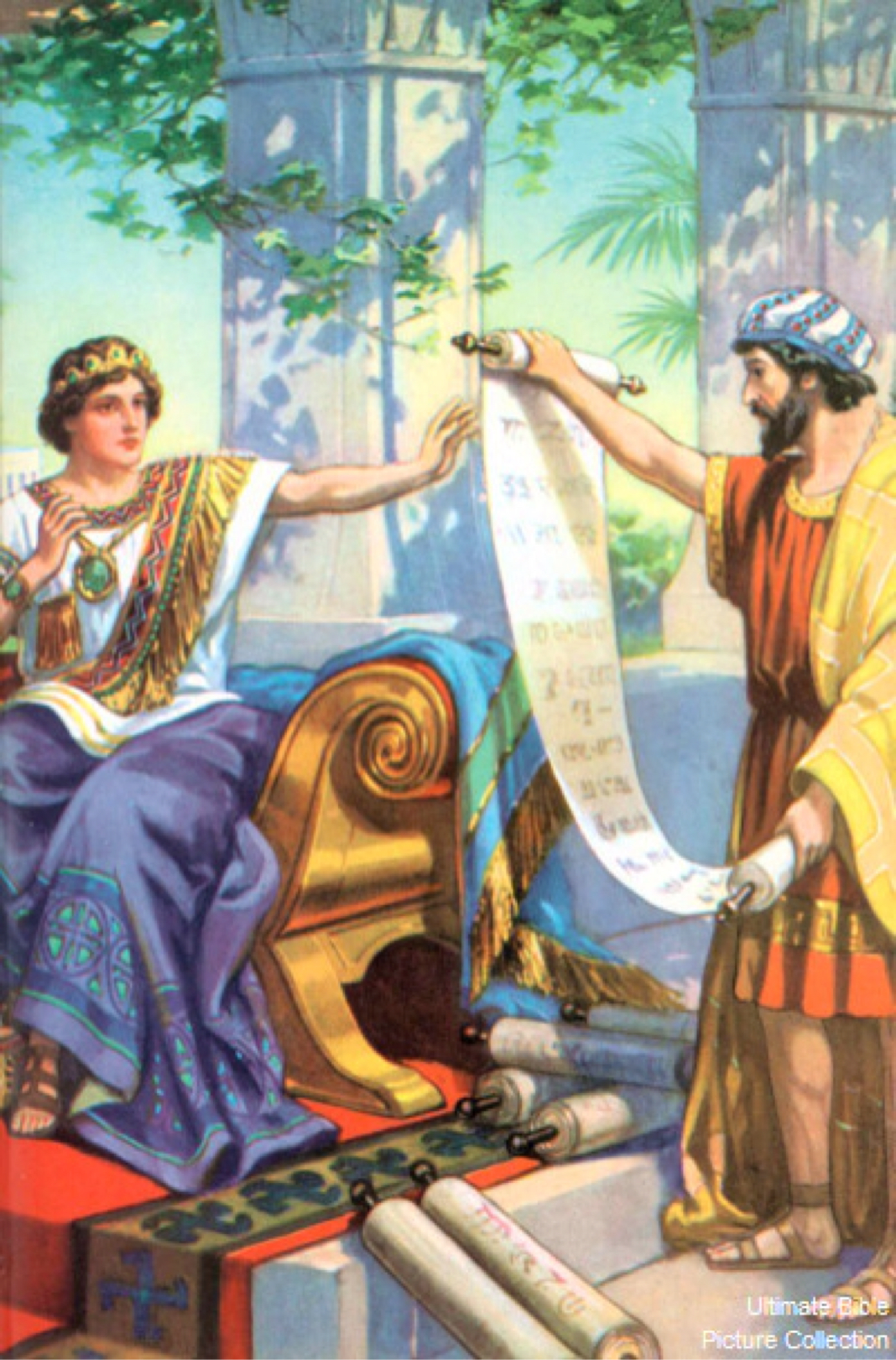 The Boy King and the Lost Scroll

Life isn’t easy at any time in our world, and that’s especially true if you’re a child.   In ancient times, that could be just as true for children who grew up in palaces as for those who grew up in poverty.

Today’s story is about just such a child who grew up in a palace.   Josiah’s father and grandfather were horrible kings who led their people far away from what God had commanded… and the consequences of their sin was about to fall on the shoulders of a child who had no say in what they did.   How would young Josiah deal with God’s coming judgment on him and the people of Judah?

It had been a rough time for Prince Josiah.     His father, King Amon of Judah, had not been a good king.   No, far from it!  He had refused to worship God.   Instead, he built altars to many false gods, he made worshipped idols and made sacrifices to them, and he encouraged the people of Israel to do the same.   He led them ever farther from God, just as Amon’s father Manasseh had done.

Amon got worse and worse until even his own servants couldn’t take anymore.   They all got together and killed King Amon.

Then, to make things even worse, the people of Judah killed all of the servants who killed Amon.   Josiah  lost almost everyone he knew except for his mother, and now she had her hands full.   What would the people do to her son?

Because after the people killed his father, they made Josiah their new king.   It was the way things were usually done, after all.

But Josiah was only eight years old.   What did he know about being king?

Fortunately, with his mother’s help and that of the Lord’s High Priest at the Temple, Hilkiah, they put together a group of advisors who worshipped God and would help him be a good king, the kind that the people of Judah needed—whether they wanted him or not!

But he was the kind of king God wanted.   And as a result, Josiah reigned as king in Judah for a long time.   He worshipped God and ruled the people well.

Perhaps most importantly, during his time as king he set about rebuilding the Temple.

During his eighteenth year as king, Josiah sent his court secretary Shaphan to see Hilkiah the High Priest and give him a message.   He said, “Tell Hilkiah to count the money in the Temple treasury, the money that all the people have given, and to give that money to the men in charge of fixing up the Temple.   Tell them to hire all the carpenters and masons and builders they need to do the job right, and to buy whatever materials they need to do the work.   And tell the supervisors they don’t need to report to me about how much they spend.   I know they are honest people and all that matters to me is that the job is done right.”

When Shaphan arrived to give Hilkiah the message, the High Priest was already excited.   He held out a scroll and said “Look what we’ve found, Shaphan.   We have found the Book of the Law.   It’s been lost for a long time.   Here, read it!”

So Shaphan did, and then he took it back to the king and told him that the money was being given to the workers as he ordered.   “And,” he said, “Hilkiah gave me this scroll he found.”

King Josiah took the scroll and began to read.   And the more he read, the more upset he became.   It got so bad that he ripped his royal robe and cried.   Finally he called together his advisors and the High Priest.   This is what he told them:

“I need you to go to the Temple and speak to the Lord for me and for all the people of Judah.   Ask Him about the things written in this scroll.   He must be terribly angry with us because neither we nor our ancestors have obeyed the commands in it.”

So Hilkiah and the others went to see a prophetess at the Temple.   And she told them:

“The Lord has spoken! Go tell the king that he is correct, that My anger is burning against this city for all the evil that My people have done.   They have turned away from Me to worship pagan gods, and I will punish them just as I said in the scroll.   I will destroy this city for their disobedience and there is nothing they can do to stop it.

“But also give the king this message: The Lord says that because the king was sorry for these sins and humbled himself before Me when he read My laws and heard what I would do to judge My people, because he wept over their sins and begged me to forgive him and the people, I have heard him.   Because his heart is right with Me, I will not bring this destruction onto the city until after he has died and been buried in peace.   Tell him that the people will not be punished during his lifetime.   The Lord has spoken!”

When King Josiah received the message, he wasted no time.   He called all the people and their leaders to join him at the Temple.   There, he read out loud to them everything in the Lord’s scroll; and there, before the Lord and in their presence, he pledged himself to obey all of the Lord’s laws with all his heart and soul.

And the people joined him, pledging that they would also obey all the laws in the scroll.

Then King Josiah began removing everything that had been used to worship pagan gods.   He removed and destroyed every piece of worship equipment that had been used in idol worship.   He tore down all the idols scattered around the land of Judah and burned them, and he destroyed every altar where the idols were worshipped.   He even desecrated the land they were built on, so it would be impossible to start worshipping them there again.

And it was a huge job! The people of Judah and their ancestors had completely turned their backs on God and worshipped every idol in the pagan lands around them.   But Josiah didn’t stop until he had destroyed every single idol, altar, and even all of the things that were used in the worship services for those false gods, every single bit of it in his entire kingdom.

While this couldn’t stop the judgment of God from coming on the people because of Manasseh and Amon’s disobedience when they were king, Josiah’s sincere desire to serve God pleased the Lord.   So the Lord did what He said He would do, and He didn’t bring His judgment on the people until after Josiah died thirteen years later.

All of which goes to show that anyone—even a child—can be a great source of God’s blessing to many people if that person truly wants to please Him.