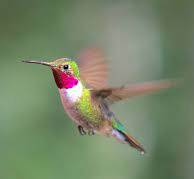 When I think of my parent’s home in the late Spring I think of hummingbirds.  May 25, 2021 would have been my mother’s hundredth birthday, so she is very much on my mind.  She had a stroke just before her eighty-ninth birthday and while she was recovering in the hospital in Scotland County, I stayed at her house so that I could check in on her every day. She was very worried about the hummingbirds!

My parent’s home was out in the country, and they had always had between eight and ten hummingbird feeders hanging along the back of their house.  After Daddy’s death, Mama continued to keep up the feeding stations. Each day when I visited Mama she asked about the hummingbirds. Was I keeping them clean? Was I filling them each day? Was “Boss Hogg” showing up? There was always one larger hummingbird that fought for a certain feeder, thus dubbed “Boss Hogg”. I did my best to fulfill this responsibility.

Each night after spending the afternoon with her at the hospital, I’d come home usually to a meal I’d picked up on my way home. After the meal I spent at least an hour returning calls to everyone in the community, her church, and our family to give updates on her progress.  The next hour was spent making the hummingbird feeder solution that was to go in the feeders the next morning. 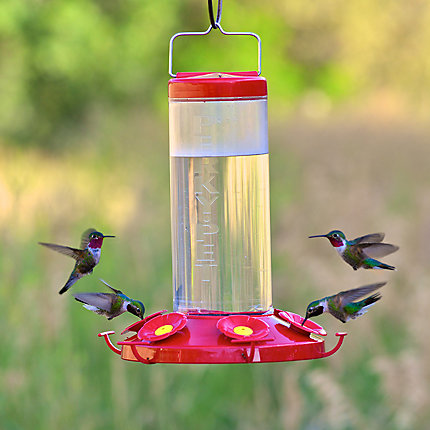 My mornings were spent taking down the feeders, rinsing them out and then refilling them. As soon as they were rehung on the hangers Daddy had made years before, the buzzing and the tiny humming sound began. They came out of the woods and suddenly there would be a swarm of no less than fifteen to twenty hummingbirds fighting for their chance at the feeders. Some had to wait their turn perched on the hydrangea bush, others on the nearby mimosa tree. They would keep their distance from me but come close enough that I could hear the air around my head moving as they zoomed by.

Breakfast and several cups of coffee were spent by the big picture window in the den where I pulled up a chair and could be just a foot away from the birds. It was one of those times that just leaves an imprint on your life. The house was so silent and there was nothing and no one else around but those birds and me.  I was so in awe of these magnificent, tiny, colorful creatures that darted around at such a high rate of speed yet could just seem to suspend in mid air. What a gift this sight was for me. During those moments of watching the hummingbirds, I forgot to worry about all that was going on with Mama, what I was neglecting at my home, all the things that usually possess my mind. I just sat and marveled at these creatures God had made. I felt such amazing peace and sense that God had it all in hand!

Now I look back and I often think about that time with the hummingbirds. I’ve had feeders at my house and I’m lucky if I see one or two a year. Unless I visit a bird sanctuary, I doubt I’ll ever be surrounded by that many hummingbirds again. God provides us comfort often at times and in ways we don’t even realize.  There’s an old saying about stopping to smell the roses, well, I think the last year has taught us to start being more mindful of everything; the flowers in bloom, the leaves on the trees, the birds, even the tiny hummingbirds, the bunny hopping in the yard, the squirrels in the trees.  Look for that peace and well being our Lord provides, sometimes His comfort is where we least expect it!

The last year has been a very trying year for everyone.  It has been a very unhappy, uncomfortable, anxious, and miserable year for me.  I sought solace in many ways such as prayer, reading scripture, reaching out to friends and family, and seeking grief counseling.  However, one of the things I found that has been very therapeutic has been watching the birds in my yard.  I’ve always had bird feeders around, but I found myself standing at the window for long moments watching the birds.  My parents always fed the birds and attracted many, especially hundreds of hummingbirds.  So, feeding and watching birds has been lifelong for me.

As I’ve watched the birds, I began to identify different species, many familiar, and occasionally a stranger I would have to research.  I watched their interaction with each other, their habits, even their manners or lack there of.   I watched what they like to eat, and what was spit on the ground.  All giving me something to think about how we humans behave.

Cardinals, more specifically Northern Cardinals, are a frequent sight at most everyone’s feeder year around.     Did you know their name was chosen by the early North American colonists because of their resemblance to the red biretta (cap) and vestments of the Catholic Cardinals?

Male cardinals show affection by feeding their females seeds beak to beak.   Awww!   Northern Cardinals are monogamous usually for their entire life span.  The female stays with the eggs and the young, while the male provides food and protection.  Flocks of Northern Cardinals are called a college, conclave, deck, radiance, or Vatican of Cardinals.  They are so beautiful and especially striking on a bleak winter day!

Susan Nelson writes in A Look at Birds in the Bible, that there are nearly 300 references to birds in the Bible.   They are mentioned more in the Old Testament than the New.  Moses talks about birds much more than Paul.   Turtle doves, sparrows, pigeons are most frequently referenced.  By the way, did you know that all mention of turtles in the Bible is not talking about the reptile but is actually referring to the turtle dove?

One of my favorite Bible passages  talks about birds.

I hope you have feeders and are keeping them filled with seed. In the coming articles I’ll share information about some of the birds I see at my feeders and maybe share some tales of more of God’s Creatures of Comfort.